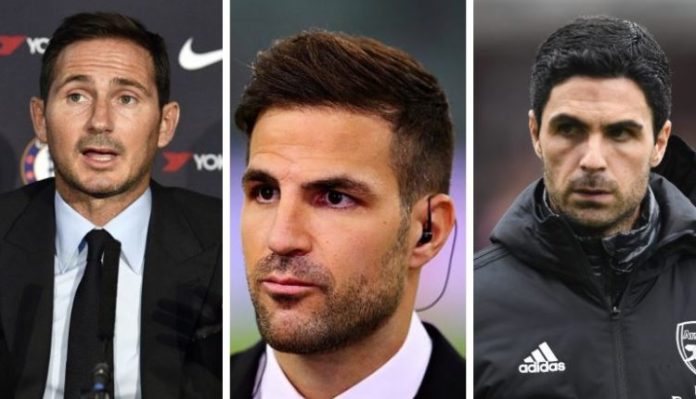 Fabregas believes years of working and type of players make it differently to understand the complexity of building the better squad.

He said Frank Lampard already became a head coach once before appointed to the blues but Mikel Arteta was assistant one, this is the first time for him to take this duty.

For players, he believes Lampard took the blues at pick time while Arteta did at recession time which explained enough who is at harder times.

Cesc Fabregas told The Guardian: “Chelsea took a gamble with Frank because it was only his second year as a main coach and he’s done very well. https://www.theguardian.com/football/2020/jun/14/cesc-fabregas-on-racism-close-stadiums-hand-out-bans-let-them-go-to-jail

“With Mikel, it’s a little bit of the same. He’s been with Pep [Guardiola] for three years, and I’m sure he’s like a master for any young coach that wants to start being a manager.

“I think he’s done well [so far] and I’m sure he’s brought back some values to the club that was needed.

“Obviously it’s a much harder job than Chelsea in terms of rebuilding the squad, and they are very young, and they had problems because [Arteta] started much further down the line than Chelsea, but I’m positive that they will pick up very soon and that next season could be the one for them.”

Pep Guardiola tells Barcelona to not “talk too loud” over Man...

Fans react after Kanye West urinating on his Grammy Award

A clip of Kanye West tossing his Grammy award in a toilet then he alleged urinated on it sparked major mental health...
Read more

Minnie Dlamini and her husband Quinton Jones are expecting a bundle of joy in coming days after the actress revealed it on...
Read more