Khanyi Mbau returns to Family Secrets as a psychologist 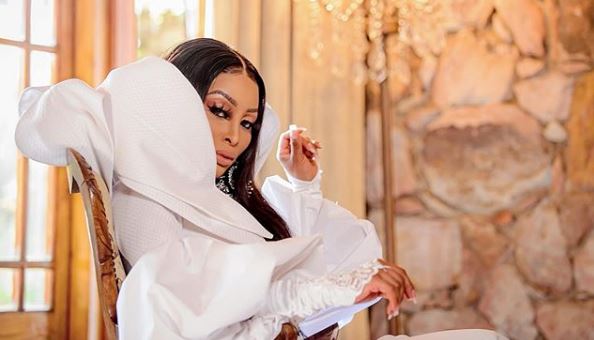 Actress Khanyi Mbau has returned to SABC’s Family Secrets as a psychologist, show’s lovers are excited for her comeback.

The star will play as Dr Rose, Joburg high-flyer Caesar Mokwena’s psychologist who seems to have a secret of her own. She announced the new role on Twitter.

“It gives me great pleasure to announce that I have joined hit series Family Secrets as a psychologist, Dr Rose,” Khanyi tweeted.

The 2020 become rough year for many artists but it did prevent Khanyi from getting gigs on screen as she announced her TV return.

Family secrets’s fans have shown their desire of her first comeback appearance on the screen, as a Dr. Rose.

One fan wrote, “Awesome👌Khanyie u never size to amaze me with your beauty and brains.. keep it up gal.. wish u all the best bcoz u deserve it bby gal.”

As you know, Khanyi Mbau lost her father this year which will make her on difficult situation but she managed to handle the situation and she move on.

The actress and vlogger Lasizwe lost their father, support and words of wisdom from fans and other celebs poured to them after tragic loss.

“My last alive parent, my dad has passed on. I am numb and confused! I am shattered!! first my mom, now my dad! I don’t know how to feel. Like how does one say, ‘My parents are deceased’, like I don’t have no parents no more. Like they dead,” Lasizwe captioned a pic of him and his dad in happier times, he shared on Insta.

After a tweep responded by advising the star to take a break from social media, Khanyi took the opportunity to remind followers to “normalise” humour.

“We need to normalise humour as public figures. But also our followers need to remember we are human too and not perfect. Everyone on this platform just wants to be heard and seen. No love lost but gained,” said Khanyi.

After her response, a follower congratulates the her for being brave making fast recovery from difficult situation she experienced this year so far.

Legendary actress Baby Cele-Maloka has opened up the reason she left popular SABC1’S show, Uzalo.The actress made it clear that there was no bad...
Read more

Katlego Maboe is under fire after his ex-partner, Monique Muller, exposing him for cheating, domestic abuse and he gave her STD.The TV present is...
Read more

Popular TV presenter Katlego Maboe has responded after his wife exposed him cheating on his ex-partner, Monique Muller, with his colleague and friend Nikita...
Read more