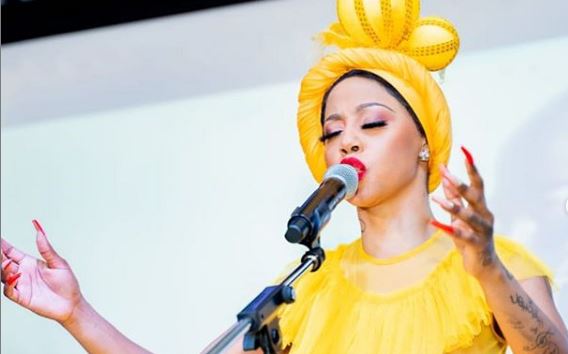 Kelly Khumalo’s lawyer releases a statement over the latest developments in the murder case of her late boyfriend and Bafana Bafana captain Senzo Meyiwa.

Kelly’s name is trending in Senzo’s murder case following leaked document alleged that she made a contact with one among of five accused hitmen hired to take Meyiwa’s life.

According to TimesLive, former Economic Freedom Fighter (EFF) treasurer-general Magdalene Moonsamy released a statement confirming that her law firm had been appointed as Khumalo’s legal representative on the matter.

“Our client notes the recent developments of which at this sad time allowed her the opportunity to remain private in the best interest of herself and children especially that of the daughter she has with Mr Meyiwa,” Moonsamy wrote.

“We wish to place it on record that our client is not implicated nor charged in this matter and is therefore not a suspect.”

Moonsamy also responded to the confidential National Prosecuting Authority (NPA) document that was leaked suggesting that Khumalo was a person of interest because of alleged cellphone records with one of the five suspects that were arrested earlier this week.

“We note that the so called ‘leaked document’, has been leaked with malicious intentions and urge that neither individual nor other parties interrupt in the process of the investigation being undertaken by the police,” Moonsamy said.

“We further note that our client has been subject to years of harassment and innuendos regarding this matter and has remained resilient and committed to her contribution to the discourse of contributing to the development and excellence in the South African music industry as a national asset.

“Our client appreciates the South African public including the continent and the world for their continued support and strength provided to her and her children at this trying rime. The immensity of your strength and love is invaluable.”

Kely Khumalo is experiencing cyber-bullying since the death of her late partner, Senzo Meyiwa, she managed to handle situation as she thanking God for strength during her hard times.

Dealing with hate comments on social media on a daily basis which sees her trending for no reason, Kelly says her strength comes from God.

“My strength comes from my relationship with God, from knowing that God has a plan to prosper me and not to harm me. And also just from being grounded, with knowing who I am,” she said.