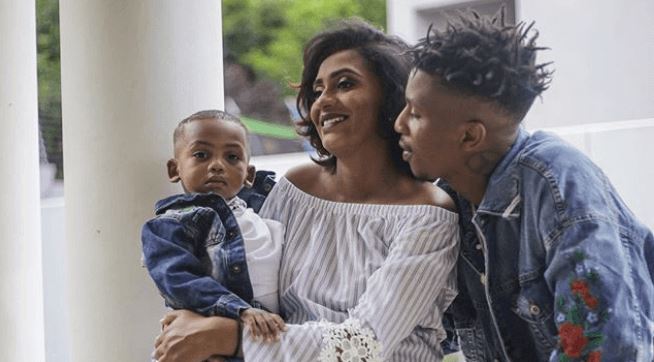 Emtee’s estranged wife, Nicole Kendall Ndevu, has responded to the rapper allegations after accusing her that she abused him.

Emtee revealed struggles as he points finger on her, accusing Nicole for making his life miserable, controlling even threaten him.

On response to those accusations, Emtee’s estranged wife defends herself from rapper accusation on her IG.

“I would like to address the false accusations made against me by Mthembeni Ndevu (Emtee’s real name). Firstly the claim made by Mthembeni that I physically abuse him is completely false and is a fabrication designed to attack my character,” her statement read.

Nicole further said that there were many other things that had happened behind the scenes, which she had refused to bring into the public eye for the sake of her children.

“I will no longer protect someone who is trying to destroy my life by making false accusations about me. This is a blatant attempt to tarnish my name and my family’s name. The truth as to the core reason for the public fallout will be revealed,” Nicole wrote.

See the full statement below;

In a series of tweets, the “Roll Up” star said Nicole had hit and bruised him and she and her mother took turns “choking” him. He said Nicole’s brother threatened to kill him.

“Both mother and daughter took turns, choking me, tryina suffocate me. Now the weight lifting brother is threatening to kill me,” wrote Emtee.

Both mother and daughter took turns chokin me tryna suffocate me. Now the weight lifting brother is threatening to kill me.

Emtee complain about mother of his two children rulling his life, he said he was staying at a friend’s place as Nicole took his house keys.

“I’m currently tweeting from my big homie crib cos she took the keys to my spot and went to her parents naso,” said Emtee.

He continued: “I haven’t freshened up in 2 days cos I can’t stand being in the same room as this person. She’s hit me, bruised me and choked me over the years so I’m scared.

In another tweet, Emtee wrote: “I’m done with all this sh** man. My kids will have to forgive me dawg. I gotta split before shit ends in tears. I love my kids to death.”

In the end, the rapper asked fans to pray for him because he is in difficult situation.

Award winning author Jackie Phamotse has clarified her thoughts on other celebs, after saying that they are using witchcraft and snakes to gain wealth...
Read more