Cardi B responds to Candace for calling her ‘illiterate’ and ‘dumb’ 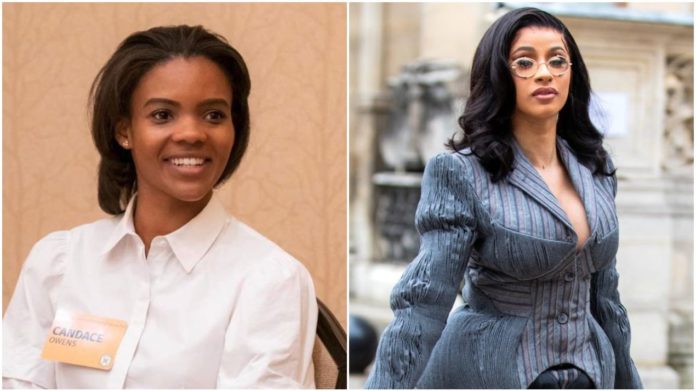 Cardi B is on war of words with controversial activist Candace Owens after she called a WAP singer “illiterate rapper” and “dumb” for interviewing Joe Biden.

Owens blasted Cardi B for recent interview with presidential candidate Joe Bidden, discussing few topics about police brutality to black community and how he can change America when he gets the chance.

After watching the interview, the activist threw shades at WAP singer saying she is not worth to interview bidden for being illiterate to politics.

in the clip posted to her Instagram account. “[Joe’s team] looks at Cardi B’s Instagram, you see millions of followers, and you think, ‘okay, this is an illiterate person and if I appeal to this person that says okurr in the middle of the interview…Black people will vote for me.’ Basically saying, ‘Black people you are stupid, you are dumb. And you’re so foolish’,” Candace went on, accusing Joe of being “handled” and being told “‘Black people like this person. This is what they’re into. Talk to her.’”

Cardi B, 27, just responded to Candace Owens, 31, telling she don’t want beefing her,

“Yes you are right I have the number 1 song & I have a huge platform and I can make millions go vote to get the MAN THAT USED YOU. I don’t want to argue with you Candace I really don’t have the time. I honestly just feel sorry for you,” Cardi tweeted

Candase Owens just continued attacking her, she claimed that Joe Biden and Bernie Sanders used Cardi B because she is “dumb” and they are flaming their past actions against black people,

“You are encouraging MILLIONS to go vote for the man that locked up entire generations of Black men. Maybe go google: JOE BIDEN AND 1994 CRIME BILL,” she wrote

She added, “Joe Biden used you. Bernie Sanders used you. Neither one of them like or know your music. They think you’re dumb.”

Cardi then clapped back, “And you are encouraging millions to vote for a man who laugh every time a Black men gets killed by a cop and tell millions of Americans to drink bleach…Trump didn’t even have you talking at the Republican convention. He thinks you’re dumb. MASA did you dirty but you mad at me?” explaining to her fans that Candace “needs to be mad at Trump not me.”

According to US magazines, Candace Owens has history of feuding other celebs for defending Donald Trump and Kanye West for their past comments against black community.

She received backlash for her words defending infamous dictator Adolph Hitler, also she was criticized for her comment tragic death of George Floyd.

She posted a Facebook Live video, “I DO NOT support George Floyd and I refuse to see him as a martyr.”

She also believes systemic racism in police departments is not an issue for the long list of Black men and women who have died at the hands and knees of cops.